Captive Insurance: Is it Right for Your Business?

In the right situation, a group can reap significant rewards from particpating in a Captive Insurance Arrangement. Since there are a number of factors that determine the feasibility of such an approach, a cost-benefit analysis is necessary to determine the appropriateness for any particular company.

As an alternative to a traditional self-insurance model, captive insurance could be a solution that makes sense for your business. The experts at My Benefit Advisor (MBA) can help you analyze your company’s claims and financial data to determine the feasibility of such a program.

Although the concept has been around for a couple hundred years, the phrase "captive insurance" had its origin in the 1950’s when an insurance broker used the term "captive" to describe an insurance company he helped form to provide coverage exclusively to his client and their "captive" subsidiaries.

As a variation of the typical self-insurance funding method, captives have steadily gained acceptance over the past few decades but have largely been confined to the larger group marketplace.

Today, however, the captive insurance marketplace flourishes due to modifications in approach, plan design and risk management that has allowed even small to mid-size businesses to an opportunity to discover its potential benefits.

The continual increases in corporate healthcare expenditures have led many businesses to look for alternative methods of cost control. Traditionally, employers have reduced benefits and/or increased employee contribution levels.

The dilemma typically encountered is how to maintain a desirable benefit level and improve risk management while reducing expenses. In recent years, many businesses have discovered these objectives can be met through a captive insurance arrangement.

Captive Insurance is generally defined as an insurance company that is entirely owned and controlled by its insured population. The owner can be a single company or a pool of employers joining together to reduce the cost of their medical benefit expenditures. By self-insuring within a captive, the typical insurance company profits are essentially eliminated. The primary objective of a captive insurer is to insure the risks of its owners and allow the insureds to benefit from any underwriting profits.

As a result, by incorporating a captive into a health plan strategy, members are able to invest their assets and benefit by being owners in an insurance company.

This is also one of the aspects of a captive insurance company that distinguishes it from a mutual company. Although the policy owners in a mutual company technically own and have control in the company, they do not put any of their assets at risk.

Captive insurance is a regulated form of self-insurance that is created, owned and controlled by its insureds.

In this paper, we’ll take a look at how a captive program works, criteria that makes for a good captive candidate and the criteria that would eliminate captive insurance as an option. Your MBA benefits consultant is available for a more in-depth analysis of the captive concept and whether it would be right for your group.

The Process of Joining a Captive Insurance Program

For the most part, captive insurance works the same way that convential insurance programs work with just a few significant differences. The following represents a simplistic overview of the process involved with joining a captive: 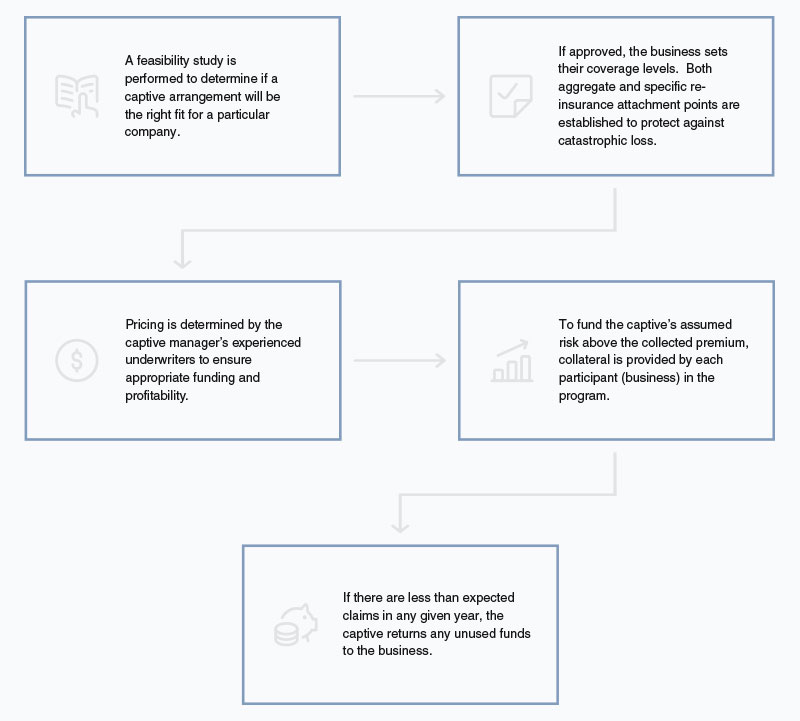 Objectives of a Captive Insurance Program

For a business owner, the primary objective of participating in a group captive insurance program is the long-term reduction and stabilization of health insurance premiums. Most employers with more than 1000 employees self-fund their group insurance program. The middle market, with employers ranging in size from 20 to 1000 employees would benefit from the cost savings of self-funding but struggle with the volatility of self-funding at meaningful retentions (>$100,000).

A group captive accomplishes this goal by placing members into a loss sensitive program where premium is developed based on the member's own experience. Rather than being subject to the annual fluctuations of the insurance market, members are now priced based on performance.

Members of the captive also have the ability to recoup underwriting profit and earn investment income. The key difference is that the member is now an owner rather than a buyer of insurance. This alternative solution creates a new mindset for the member and provides incentives to better manage risk and prevent losses.

Additionally, by avoiding the restrictions of a fully-insured model, they are able to customize their coverage to fit the specific needs of their company, avoid many of the ACA and premium taxes and enjoy long-term premium stability.

Gaining Transparency Through a Captive Arrangement

Most employers who offer fully-insured health benefit plans have no idea what type or dollar amount of claims their covered population incur, or how their premium dollars are allocated. Most insurers simply do not disclose this data, especially not to anyone but their larger groups.

With captive insurance arrangements, an employer will generally have full access to how their dollars were spent…detailed claim information, dollars allocated to retention costs and amounts paid for re-insurance.

By sharing this information, companies participating in the captive are incentivized to help each other by sharing their best practices to lower loss experience, thereby improving the overall results of the captive.

Advantages of a Captive

Is a Captive Insurance Program a Good Idea for My Business?

As corporate healthcare spending continues to escalate, more businesses are considering a move from the traditional insurance marketplace to captive insurance as a method of cost control and risk management. A captive program enables a business to self-insure programs that would otherwise be insured by a third party.

Although there are many benefits of a captive insurance aggrievement however, it will not be the right approach for all organizations. As such, a detailed, methodical and professional analysis should be performed prior to any decisions being made. Along with the resources offered by a well-qualified benefit consultant, a business owner should consider an evaluation from professionals regarding tax, accounting and legal issues.

Gaining Transparency Through a Captive Arrangement

Most employers who offer fully-insured health benefit plans have no idea what type or dollar amount of claims their covered population incur, or how their premium dollars are allocated. Most insurers simply do not disclose this data, especially not to anyone but their larger groups.

With captive insurance arrangements, an employer will generally have full access to how their dollars were spent…detailed claim information, dollars allocated to retention costs and amounts paid for re-insurance.

Case Study: Funding Employee Benefits Through Use of a Captive

A mid-sized prospect approached us last year expressing frustration with the inability to access detailed claims and retention information from their insurance carrier. They were fully-insured and confident their covered population was generally healthy and were tired of paying for the "profits" of a third-party insurer. They were looking for an alternative to the traditional model of group health insurance.

We spent considerable time reviewing different alternative funding models with the owner and human resource team but the one that piqued the interest of the company’s owner the most was entering into a captive insurance arrangement. In an effort to determine if this would be a good fit for the group though, we first had a captive manager conduct a feasibility study which, when completed, yielded positive results. We reviewed the mechanics and installation process with the HR team, identified all requirements and potential risks with the business owner and met with the corporation’s business attorney and accountant. The unanimous consensus was that a captive arrangement seemed a good fit for this company.

The strategy was announced as part of the open enrollment process and the subsequent conversion went smoothly. The company was able to expand and enhance their corporate wellness program and still saved over $120,000 the first year in the program.

Our Advisors offer in-depth analysis and are ready to help you successfully navigate employee benefits and health insurance.

Send Us A Message